Researchers seek to isolate cannabis from concurrent use of alcohol, tobacco, and illicit drugs. 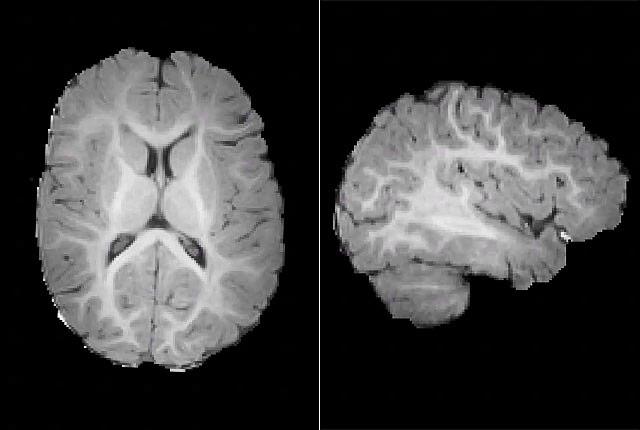 Kleinhans Lab
MRI scans of infants’ brains are part of the evaluation to discern effects of prenatal marijuana exposure.

UW Medicine researchers are recruiting pregnant women to study whether prenatal marijuana use – in the absence of alcohol, tobacco, and any illicit drug consumption – affects their infants’ brain development, cognitive and motor development, medical health, and social behavior.

The “Moms + Marijuana” study is co-led by Drs. Natalia Kleinhans and Stephen Dager, radiologists at the University of Washington School of Medicine. They will track the subjects’ marijuana use from the first trimester throughout pregnancy and then scan infants’ brains at age 6 months to identify possible effects of cannabis exposure.

Kleinhans said this study aims to expand on existing literature by clarifying marijuana’s effects without the confounding influences of alcohol, tobacco and other drugs.

“The very few investigations that have studied prenatal cannabis exposure and infant brain development have all involved women who are polysubstance drug users. No one has looked at marijuana use exclusively,” she said. “This study will also involve periodic drug testing during pregnancy to verify in real time that moms aren’t using other drugs, rather than relying on the mother’s self-report after the child is born.”

Kleinhans hopes to recruit 70 women, 35 each in a test cohort and a control cohort; all will have to be pregnant 13 weeks or less at time of enrollment. The control group will consume no marijuana, alcohol, or tobacco.  The test cohort will be composed of women who use marijuana at least twice a week, primarily to control morning sickness.

“This study is targeting a very specific population of women who are using marijuana to manage their symptoms while they’re pregnant,” Kleinhans said. “There’s little research to back up the medical and public health advice they’re getting to stay away from pot to control nausea.

“Most medications prescribed for morning sickness have not been rigorously tested in pregnant women and appear to have side effects that are not minor. Remember that thalidomide, a particularly extreme case, was given to women to reduce nausea during pregnancy.  Pregnant women have minimal drug-safety information to rely on when deciding whether to take a pharmaceutical, but it’s marijuana that has the negative connotation,” she said.

For the duration of their pregnancies, test-group subjects will be required to report weekly marijuana use, to purchase marijuana only from licensed sellers, and to send digital photos of the product packaging so researchers can record percentages of tetrahydrocannabinol (THC), pot’s main active ingredient, and cannabidiol (CBD), a non-active compound in pot whose potential therapeutic properties are the focus of much current investigation.

When the babies from both groups of mothers reach age 6 months, they will be formally evaluated for cognitive and social development, communication and motor skills, temperament and other behaviors. The babies, while asleep, also will undergo functional MRI (fMRI) scans of their brains. During the scans, the babies will be administered an odor of phenyl-ethanol, a compound known to activate brain regions involved in reward and addiction.

“Smell is one of the earliest developing senses, and it activates brain regions that have cannabinoid receptors and are involved in reward and addiction. We will use fMRI to look at the integrity of the reward system that we think could be affected by marijuana – to see if there is a change,” Kleinhans explained.

Researchers will analyze the MRI images and behavioral data to discern whether differences exist among babies that were and were not exposed to cannabis.

Funding for the research comes from the U.S. National Institute of Drug Abuse (R21-DA046696).

The study is recruiting participants who are pregnant 13 weeks or less for both the test and control groups. Find details at the study site or contact the Kleinhans Lab (klab@uw.edu, 206.616.0607).