The FDA has approved esketamine nasal spray as an adjunctive therapy for adults with treatment-resistant depression (TRD), which affects approximately 30% of patients with major depressivedisorder. It’s the first regulatory approval of esketamine, the s-enantiomer of ketamine, for any psychiatric condition worldwide. “There has been a long-standing need for additional effective treatments for treatment resistant depression, a serious and lifethreateningcondition,” Tiffany Farchione,MD, acting director of the FDA’s Division of Psychiatry Products, said in a statement. Marketed as Spravato, the drug is indicated for patients whose depressive symptoms haven’t improved after treatment with at least 2 oral antidepressant monotherapies. It is intended for use with a newly initiated oral antidepressant. The approval was based on 4 phase 3 randomized clinical trials, only 2 of which demonstrated esketamine’s clinical effectiveness in treating patients with TRD. In 1 trial, patients receiving twice-weekly intranasal esketamine had significantly improveddepressive symptoms from baseline compared with those receiving placebo. In the other trial, a long-term maintenance-of-effect study, patients instable remission who continued esketamine treatment relapsed on average 120 days later than those who switched to placebo. Patients in both trials received a new oral antidepressant in addition to esketamine or placebo. Because of serious safety concerns, patients can take intranasal esketamine only at a certified medical office under a health care professional’s supervision. The drug label contains a boxed warning regarding the risk of sedation, cognitive impairment, dissociation, abuse and misuse, and suicidal thoughts and behaviors. Because of these risks, patients must be monitored by a health care professional for at least 2 hours after self-administering the drug. Common adverse events linked to esketamineincluded dissociation, sedation, cognitive impairment, dizziness, nausea, vertigo, anxiety, lethargy, increased blood pressure, vomiting,andfeelingdrunk.Esketaminemay pose additional risks for patients with poorly controlledhypertension or preexisting aneurysmal vascular disorders and is contraindicated for pregnant or breastfeeding women. 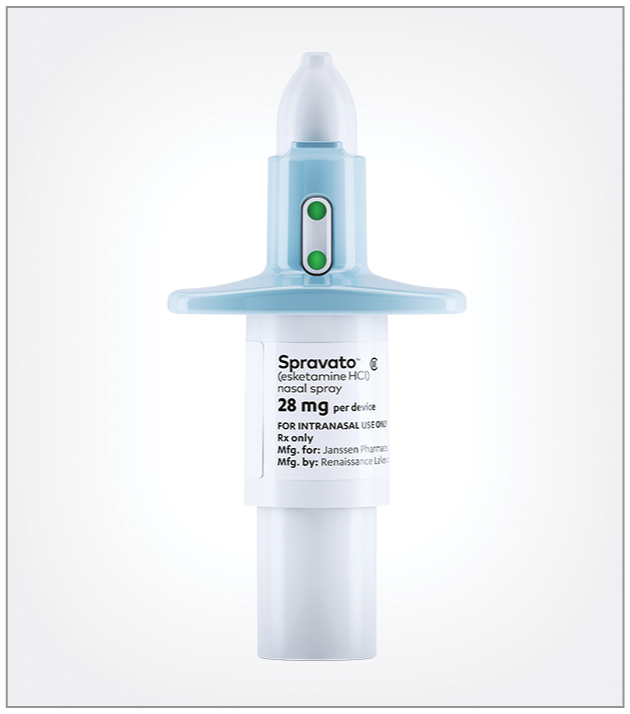